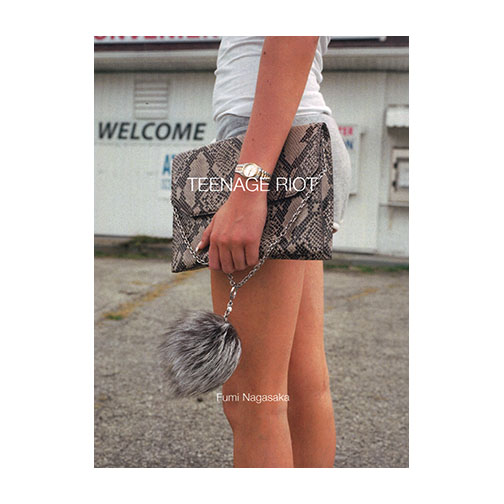 Based in New York, the Japanese photographer Fumi Nagasaka has become recognized for her inventive and honest portrayals of adolescent life that tend to go against prevailing norms found in most mainstream publications. Choosing to primarily work with teenage girls over extended periods of time Nagasaka creates intimate and unself-conscious views of her subjects that would be impossible to achieve through one sitting. Somewhat unique within the world of photography Nagasaka’s images present an unmediated view of that difficult transition from child to adult.

Created over a number of years, Teenage Riot is a poetic and honest representation of adolescent life. Calling to mind short length documentary films of the 1970s which strived to penetrate the real story behind the headline, this three part compendium skillfully presents not only the ephemera beauty of the moment, but the ever changing conditions that culture, environment and fashion have in forming one’s social identity.

Born in Nagoya, Japan, Nagasaka moved to New York in 2001 to study English and explore North American culture. In 2003 she started working as a freelance photographer for the Japanese cult magazine Street, and later traveled around Europe shooting documentary photographs. Today she divides her time between commercial and creative pursuits. Her photographs have appeared in magazines such as Dazed&Confused, AnOther, Vogue, NY Times T, 10 Men, SSAW, and others. This is her third book.